2020 is an interesting year that brought people to online forums to vent, rage and rant of some sort on technology specific to coding. Earlier it was limited to some WhatsApp groups or in gossip columns. I realised the questions were genuine but the conclusions weren't convincing. The questions like Why Coding, AI, & robotics for kids? I think deep down in hearts parents know that several professional skills would demand knowing programming. Parents feeling lost with changing technological innovations; concerns of screen time & safe use of the internet is understandable. Some other interesting argument was on comparing other activities versus coding. I think this wasn't the right approach. As I can't say - I love swimming hence I don't need coding. Several such arguments, rage and rant on social media helped me to decide to write and present an idea on a TEDx platform.

I share my experience of being an observer from parents point of view and as well as organisation point of view which is passionate about technologies such as robotics, coding, AI, Design Thinking & Data Science for K12. The main goal is to provide several views to parents, students, educators and EdTech about approaching the technology for kids.

I hope the purpose of this TEDx talk will be valuable to reflect and discuss to support kids in learning and applying technology for a better world.
The idea in the talk doesn't intend to push anyone to be early adopters as individuals could make an informed decision. As I believe parents know their kids better than anyone else does. I hope to build an awareness for parents, educators, kids and EdTech on Coding Literacy.

I take this opportunity to thank the TEDxVCE team for believing that idea is worth sharing. I specifically like to thank Mr. Akash, Organiser of the event for the support. I also like to thank Mr. Sai Hruday Mudam for being instrumental in mentoring the TEDxVCE team and helping speakers to curate the content. I am humbled by the creative space given by QtPi Robotics & QtSTEAM.

Journey of reading/listening to penning the idea for over seven months to presenting on TEDxVCE has been a journey to look back and smile! 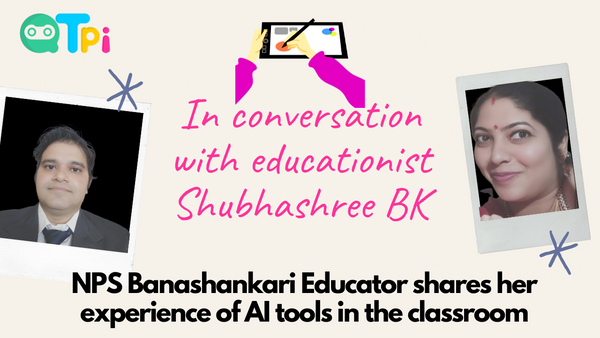 If someone asks me how to make classrooms a learning place? Its teacher who reaches out and connects with students through discovery and learning something new. The need of retaining 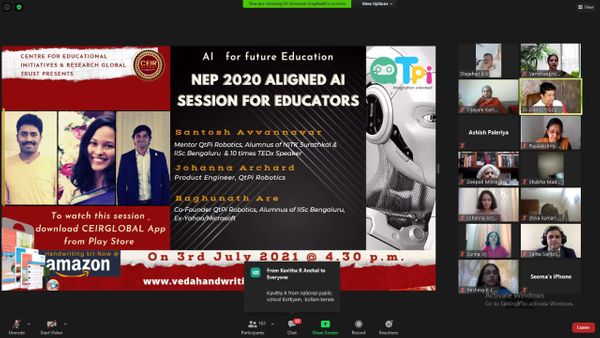 QtPi Robotics in collaboration with CEIR Global offered Series 1 session on AI for educators. The debate of digital technologies has slowly making educators and parents to embrace highly since