I assisted Mr. Michael on several hiring assignments for start-ups  fresher recruitment and well-established firms. He always insisted on hiring toppers from the list that was made available at campuses. I wondered, why did he reject bottom one’s? Some applicants’ with lower percentages would often come over to attend a presentation to seek an allowance to appear for a test/first round of assessment atleast. However, Mr. Michael always turned down the request in his assertiveness. This situation continued at several campuses. I always had sympathy for those who were turned down by Michael.

While traveling from the last campus recruitment, I asked Mr. Michael his reasons for turning down applicants with lower cut off. I was curious to understand, how could a small percentage of allowance (cut-off) would help him either? In his stern look he replied, ‘it matters a lot!’ I jumped to ask, how?! Same as distinguishing one class to another, first class to second class and so on, he replied. He went to explain, my concern, ‘the challenge with the most (not all, exceptional do exists!) of the lower percentage applicants is – they are never had faith in teachers who taught them, they believed in non-existent matters, they doubted on parents and teachers promises to help to overcome their challenges and never believed themselves. I call such people as backsliders! They form a gang to make others backslide with them. They believe most in ‘excuses’ because they don’t have faith either, and in excusing you and me, they are excusing themselves! But do we excuse them? I challenge you to go back to your backsliders friends and see if they don’t murmur against their authorities and perhaps hate them too! Even assuming that we offer them a job out of sympathy, they would backslide very soon! I’m saying this because the one who complains about the challenges at work and then quits just before the success, never gets to enjoy the fruits of success! While I listened attentively to Mr. Michael to ask a final question, ‘don’t you think exceptional exists?’ He replied hastily, ‘exceptions are exceptional!’ and unfortunately we don’t have more than one Einstein!

Few parents have asked us this question on Genie Platform: Coding Anywhere Anytime Thanks for the wonderful question and its widespread one. This question brings to understanding that the coding adds value in many different areas of life such as engineering, medicine etc. This 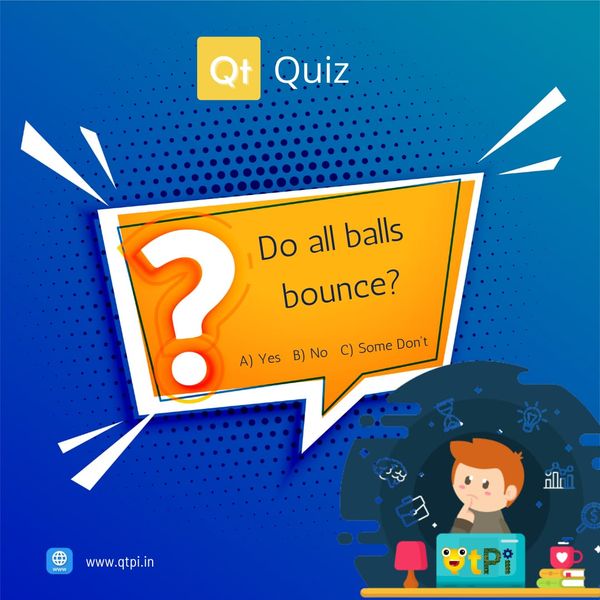 On 12th Feb QtPi Student Ambassador, Ms. Aakruthi had a question:Do all balls bounce? Ms. Aakruthi, Quiz Master leads a session with other students ambassador to see their views