If there is going to be any war it's likely going to be because of ‘water’. Like me several people must have witnessed the water crisis until bore wells were accessible. And this is still a scenario in several parts of the country. In summer people travel several distant parts to fetch water. It's well documented that borewells take more time to get replenished than open wells.

Day after day, the world continues to pour out such tales of people suffering because of the water crisis. This is quite a challenge. Wandering in search of drinking water must be frustrating on a regular basis.

Perhaps its an responsibility as an innovation company to present such problems to children and introduce a solution. Through such an approach we believe kids will become admirers of community problems and someone would continue to refine the idea to become one of the greatest inventors to help the community.

This idea we continue to sow in minds from 2017 onwards. One group of students who worked on this idea presents their thinking of optimising water usage for agriculture.

They believe each crop requires differential water quantity and requirement of water is based on the soil moisture content. Their analogies are to thirst-quenching mechanisms where they don't drink until the throat dries off. An interesting logical argument, I must say! What do you think?

Such activities through QtSchool , that is integrated with NEP 2020 to bring out and nurture 21st century skills such as cognitive capacities, critical thinking, creativity, communication. The multidisciplinary is the future to bring out solutions and give a holistic development for kids. 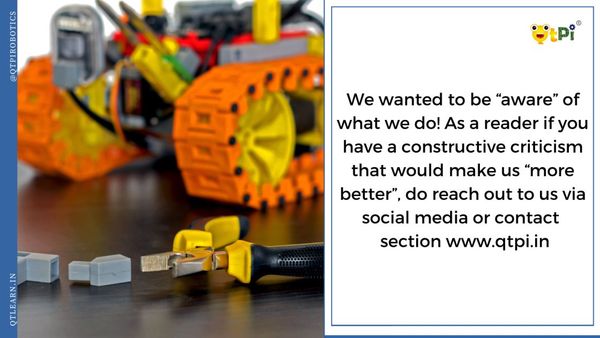 I believe wanderers no explorers without directions. Not all could be Vasco da Gama, exceptions do exist and he wasn’t a wanderer. On the other hand explorers will have